Expressionism was an ism, in the art terminology, adopted by the German artists in 1905-1926. Until then Gauguin, Cezanne and Van Gogh worked with the colors in a new expressive way. Matisse, who loved the use of bright colors and rough paint strokes, was the father of The Fauves –  the French pendant to the German Expressionists.

Now a short history of the German Expressionists.

We are in Germany in the beginning of 1900. People are immigrating to the city in the name of industrialization, searching for work and prosperity, soon facing a life of poverty, depression and emptiness.  Furthermore the Great War is threatening. It is a time of meaninglessness and religious doubt, increased by Darwin’s theory of origin of the human and Nietzsche declaration that God is dead. An existential vacuum is created. The man feels lost.

The artist feels the urge to paint out loud and wild. He feels the urge to build a bridge between the present and the creative future. Die Brücke arises. The members are Fritz Bleyl, Erich Heckel, Ernst Ludwig Kirchner and Karl Schmidt-Rottluff. Later members were Emil Nolde, Max Pechstein and Otto Mueller.

The group of the primitive and provocative Expressionists was founded in 1905 in Dresden. They were greatly influenced by Matthias Grünewald (1475-1528), noted for his intensely expressive Christian art, and by the Post expressionists: Gauguin and Vincent van Gogh:

Another inspiring source was the work of early expressionist Edvard Munch (read my post on Edvard Munch).

German Expressionism is a bold and bitter protest movement and a style of modern art. The colors are bold, orange, blue and black. The expression is dark and raw like a deep roar.

Another group of Expressionists was Der Blaue Reiter. The group was formed in Munich and had members like the Russian born Wassily Kandinsky and the German Franz Mark, Paul Klee, Gabriele Munter and August Macke. They were spiritual Expressionists. The pure colors have expressive powers; by the use of colors they were able to express an inner sound of things. Especially music and primitive art influenced the group. They believed in freedom to experiment and express an inner sphere.

The two groups didn’t exist for long, but their influence on modern art is great. The term Expressionism did not firmly establish itself until 1913.

Next time I will take you to Austria to visit the “rock’n’ roll” artist, Egon Schiele.

Until then you can read more about the German Expressionism on Wikipedia:

When I saw Edvard Munch’s iconic expressive horror painting ’ The Scream’ for the first time, depicted in a school book, I was too young to understand this raw and somber piece of art. I found the painting fascinating, but to be honest – quite ugly. I knew nothing about suffering souls; they didn’t exist in my safe childhood.
But on the bumpy road, I have come to meet a million faces – I have met the suffering souls. ‘The Scream’ contains all horror, illness, anxiety and pain – then, now and for eternity.

The lines are wavy like tongues, the colors in the sky are burning, the nature is dark and disturbing. Munch writes in his diary about his terrifying experience that led to  ‘The Scream’. He was walking along a path…

… ‘I was walking along a path with two friends – the sun was setting – suddenly the sky turned blood red – I paused, feeling exhausted, and leaned on the fence, there was blood and tongues of fire above the blue black fjord and the city – and I sensed an infinite scream passing through nature.’ – Edvard Munch.

In his childhood, Edvard Munch was often ill and kept out of school. He spent hours drawing. He lost his mother at five and his favorite sister in a young age. Another sister was suffering from severe mental illness. His brother died 30 years old. Edvard’s childhood was poisoned by illness and death. Furthermore, Edvard’s father was an unpredictable, religious fanatic and a permanent threat to Edvard. The father told ghost stories, like the tales by Edgar Allen Poe, which gave the fragile Edvard terrible nightmares and paranoid visions of death. Dark motives of illness, death and loneliness were created in Edvard’s childhood and expressed in his work in the years to come.

‘My fear of life is necessary to me, as is my illness. Without anxiety and illness, I am a ship without a rudder. My art is grounded in reflections over being different from others. My sufferings are part of myself and my art. They are indistinguishable from me, and their destruction would destroy my art, I want to keep those sufferings.’
– Edvard Munch

In the years 1892 to 1908, Munch spent most of his time in Paris and Berlin. The first visits to Paris inspired Munch to paint impressionist, pleasant interiors with knitting women. But he felt limited by the Impressionism and Realism and came to feel greatly affected by the Post-Impressionists, Vincent van Gogh and Gauguin. Munch wanted to paint living people who breathe and feel and suffer and love. Munch wanted to express the subjective deeper layers, the subconscious, through expressive colors, composition and raw brushwork. He adopted Gauguin’s large areas of color with heavy outlines – especially characteristic in Munch’s extremely captivating prints. Munch’s sufferings were his prime painting motor. He transformed pain into expressive art.

The 1890s were the peak of Munch’s art. His symbolist and expressive art became widely appreciated and he achieved great success. But despite his success, Munch was a suffering and tortured soul affected by his childhood of illness, loss and anxiety. Furthermore, his love life was a  disaster and he suffered from paranoia. Munch was drowning in misery, and alcohol. In 1908 he had a nervous breakdown, which led to hospitalization.
After a longer stay at a nursing home in Denmark, Edvard turned back to life as a healthier man and his art became more cheerful. The treatment had made it possible for him to live, but more difficult to invent art. Expressing the darkest and deepest feelings was unique for Munch. On his recovery the colors became lighter and brighter. Instead of painting an inner somber chaos, Edvard searched for more optimistic and universal symbols, like ‘The Sun’, rising with hope for a brighter future.

Munch lived the last two decades of his life in Norway in relative isolation. He painted expressive self-portraits, landscapes and scenes of workers, but fewer new insights, revelations and expressive explorations of the psychic nature of being. Edvard Munch died in 1944.

‘All important things in art have always originated from the deepest feeling about the mystery of Being.’ – Emil Nolde

I will dig into the field of expressive art and Expressionism. Art has always been a symbolic and expressive way of communication. The artist is expressive. He tells stories of his time and people, he depicts landscapes – beautiful like a dream or wild and threatening, he paints the still life delicate or in decay. He paints layers and secrets. He plays with us, he challenges us. By the use of colors and by his way of leading the brush over the canvas, he reveals an deeper sphere. The artist impresses, expresses, pleases and disturbs.

Years ago, a voice inside me convinced me to grab the brush and paint – to express my inner landscape, influenced by the outer world – in order to gain insight?
I don’t know who I am today, until I paint. In the working process one reveals oneself. The strongest feelings, pain and darkness, but also gratefulness and glimpses of immense joy are my mainspring, my motor. Beauty in the ugly fascinates me. I admire the courage by the tormented Munch and the wild Expressionists, the courage to break the boundaries in art – using dramatic and disturbing colors and brutish brush strokes, experimenting and expressing to wake and to warn the world drowning in meaninglessness.

I’m exploring the expressive art, in order to understand my own longing to be expressive.  The journey begins in Norway, I’ll go to France and to Germany, I will visit Egon Schiele – one of my favorite artists, but also the contemporary Expressionists; Per Kirkeby and Marlene Dumas. The list is long.

“Man screams from the depth of his soul; the whole era becomes a single, piercing shriek. Art also screams, into the deep darkness, screams for help, screams for the spirit. This is Expressionism.” – Hermann Bahr (1863-1934), an Austrian Writer, playwright, director and critic.

An ism indicates a new direction. The Expressionism was a modernist movement that evolved in France and Germany in the beginning of 1900 and culminates during the Great War. The Expressionism encompasses art in which the artists are free to move beyond limitations, he is concentrating on the feelings affected by the pulse of his time. In Germany, especially two groups of artists experimented in the field of expressive art: Die Brücke and der Blaue Reiter. Their work signifies art of highly subjective and instinctive qualities. It was a reaction to the neat and superficial Realism and Impressionism.

Die Brücke wanted to scream out the madness and emptiness of the world, in the era of Industrialization. People are immigrating to the city, but are soon facing a life in smock, illness, poverty and loneliness, and the Great War is threatening. Die Brücke was greatly influenced by the symbolist painter and ‘Pre’-Expressionist from the cold and melancholic north, Edward Munch. His art was exhibited in Germany in 1892. It evoked bitter controversy (alias “The Munch Affair”), and after one week the exhibition closed. But the young artists in Germany felt immensely attracted to and inspired by his captivating, expressive art.

The journey has begun. Next time I will take you to Norway – to melancholy, anxiety and death.

‘From my rotting body, flowers shall grow and I am in them,
and that is eternity.’ – Edvard Munch 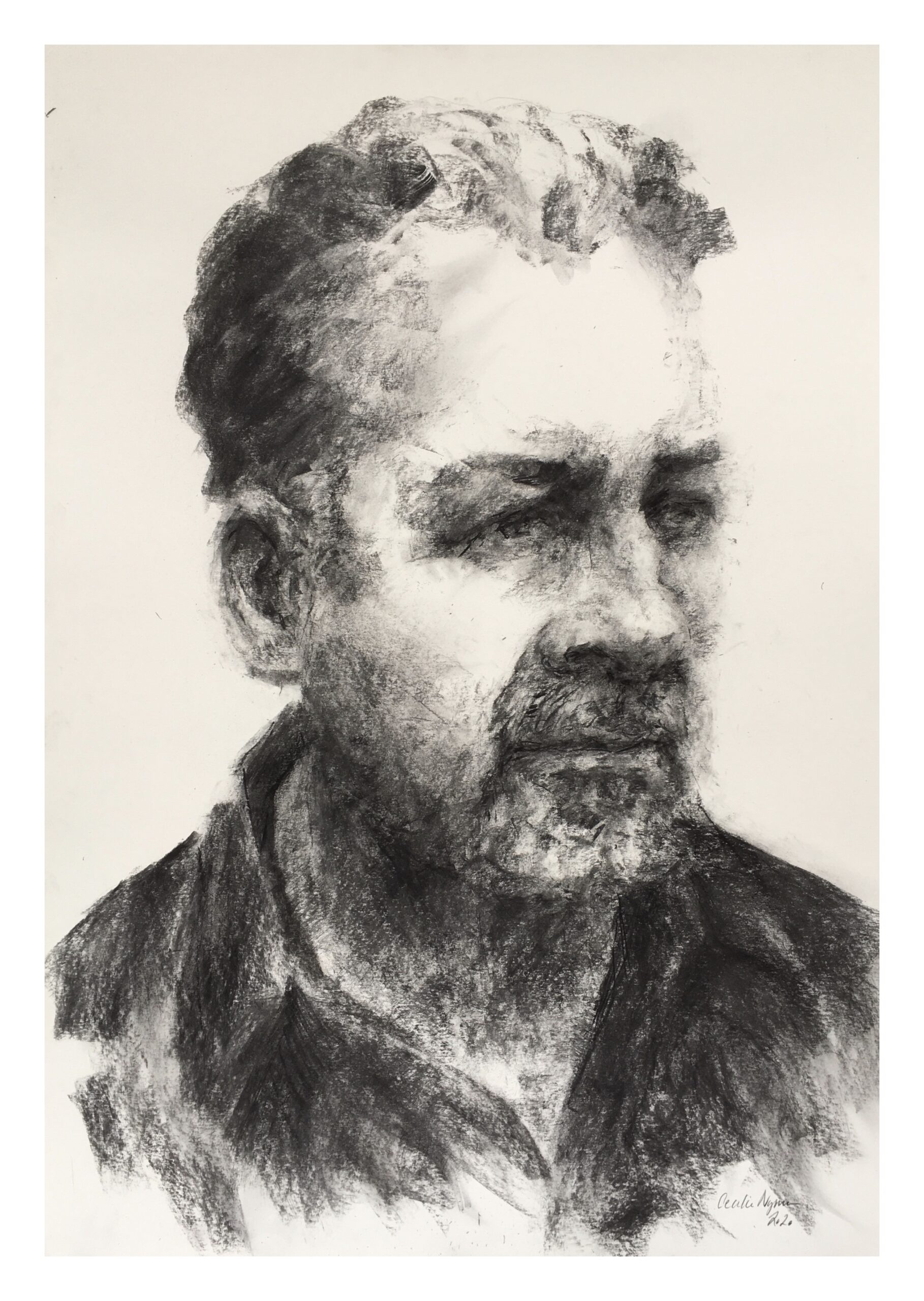